The Main Applications And Uses Of Vibratory Feeders

A vibratory feeder is a vibrating pallet. The vibration has a component that causes the particles on the tray to move with very little runout in the direction of the outlet end of the tray itself. Vibratory feeders have a variety of uses, the most common of which are similar to a conveyor belt, it transports the bulk product from the inlet end to the outlet end of the pallet. As a pure conveyor, the vibrator is at a disadvantage compared to a belt because the conveying speed is slower, its length is limited due to its construction, and although it can be conveyed by product vibration, it loses its higher conveying speed.

As a vibratory feeder

It is a conveyor that has another machine feeding at its end or outlet.

As a vibratory spreader

The vast majority of machines that perform sorting (screens, Foucault separators, magnetic, optical, etc.) require feeding over the entire functional width of the sorting machine itself. Without this type of feeding, these machines would significantly degrade their performance. 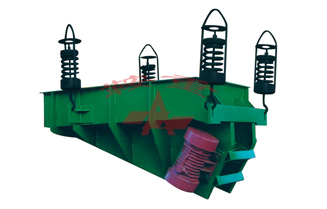 The specific geometry of the vibratory trays is also used to better achieve this distribution effect.

When installed at the bottom of a hopper or bin or in a tunnel under a product stock, it has the ability to extract product at the desired rate in a constant and uniform manner.

This is important at the beginning of any production line as it allows the product to be introduced at a properly regulated and uniform flow rate during the process so that subsequent machines can operate properly.

It has the function of extracting the product at the desired rate in a constant and uniform manner, when installed at the bottom of a hopper or silo, or inside a tunnel under a product stock.

This is very important at the beginning of any production line since it allows to introduce the product in the process with a uniform flow properly regulated, so that the successive machinery can function properly.

A vibratory conveyor also has its advantages because it is less likely to be torn or burned into a metal pallet in the form of a belt, and there is no product spillage in the typical belt return section. 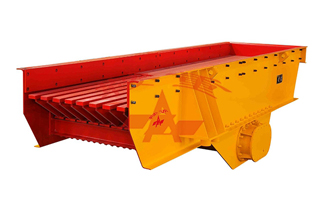 ● Varying the speed by using a frequency controller.